Girolamo Forni, called Girolamo della Grana or also Girolamo dai Forni (Montecchio Precalcino, 1540? – Vicenza, 1610), was an Italian entrepreneur, painter, art collector and timber trader, member of the Olympic Academy who lived between the XVI and the 17th century in the Vicenza area.

Girolamo Forni, orphaned at an early age, was helped by his uncle, Friar Giampietro from the Ovens of the Order of the Conventual Friars Minor, together with his older brother Iseppo, and five sisters when they were still minors. The father, also named Girolamo, coming from Forni di Valdastico, had moved to Montecchio Precalcino, where he was certainly present in 1528 as evidenced by a notarial document.

Girolamo Forni is documented in full possession of his legal faculties at least at the beginning of 1550. In addition to having an incipient timber trade, he appears as Hieronimo a painter in the register of the parish of Saints Vito and Modesto di Montecchio Precalcino. His contemporary Giacomo Marzari also speaks of him in La Historia di Vicenza as an art collector. 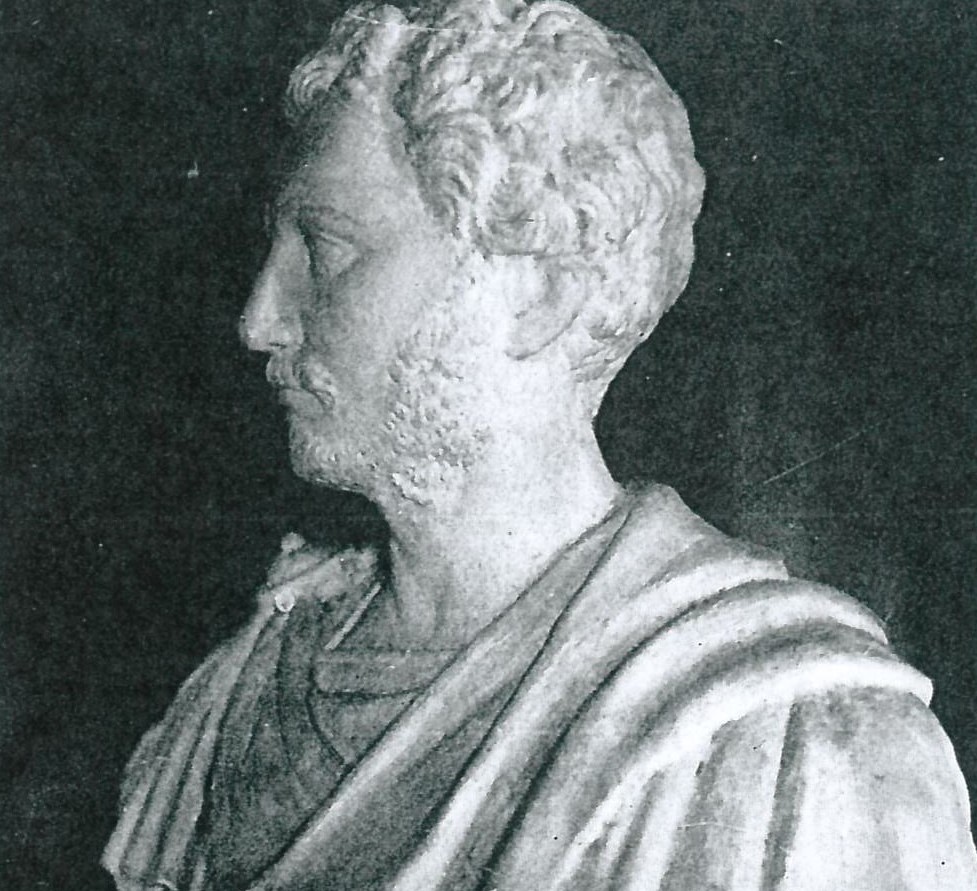 Olympic Academician, he supplied the timber necessary for the construction of the Olympic Theater of Vicenza and was represented in the form of a statue in the attic of the scene in front, in the third upper order, in the corner with the left side. The inscription HIERONI FURNIO HIER F. is engraved on the base of the statue. 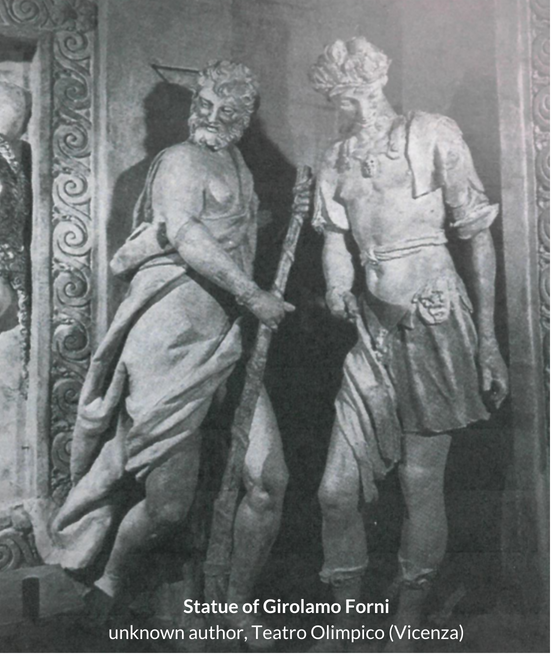 In his career as an entrepreneur, in addition to that of a timber trader, his activity as a tenant, collector of crops and real estate is documented. He died in Vicenza and asked to be buried in the Carmini Church, where his wife Isabella had already been buried.

He is considered the commissioner of Villa Forni Cerato, located in Montecchio Precalcino, the work of Andrea Palladio, registered since 1996 on the list of UNESCO World Heritage Sites.

Much information on the life of Girolamo Forni can be deduced from his will, written on January 10, 1610.

The will of Girolamo Forni

In the name of our Lord Jesus Christ and so be it. The year of his birth 1610, the day of Sunday 10th of January in Vicenza on the site of the house of Mr. Gerolamo Forni citizen of Vicenza, who lay in bed sick but of good speech and memory and having sent me to call as a notary to make his last will gave me in hand two sheets of paper of his hand written with erasures and more and wanted me to read them and then ordered me to write this present testament of his in the manner and form that will follow here.

In the name of God the Father, the Son and the Holy Spirit, and of his holy light, I, Geronimo Forni, sane in mind though ill in body, will give order to my things, but first of all I will refer to the Most Holy Clement, Father and Lord with reverence of spirit, so that he does not bother with my errors, sins and offenses done to his greatness and goodness, and be worthy to have mercy on me miserable sinner, and to have compassion for my weakness and to protect me with his most holy grace, and above all I commend to him this soul that has granted me.

And coming to the disposition of my body when it pleases God to call me, I want it to be placed in my burial at Carmeni without any ceremony but with that modesty and Christian temperance that will seem to my Commissioners etc.

I leave for God’s sake to the poor prisoners ducats ten for one time.

I want three damsels of good condition and fame in their conscience to be married from my commissaries, with 10 ducats for each of them for the love of God in my health.

I leave to the priest, Friar Gio Batta from Vicenza, my confessor of the order of San Michele, all the reasons and actions that I can have in a burial of Vicenzo del Toso, my brother-in-law and others who are in San Michele, who can dispose of them as I could.

I dispose that something for alms be given to woman Anna da Schio, like three ducats for her needs, she stands at the Fountain of Angels.

I leave to Lorenzo Baruffa my servant a ducat for once over his wages.

I ask that Donna Fiore, my servant of the house, be left with wheat and a tub of good wine every year, and that she be kept at home until the arrival of the Charming Illustrious Count Lunardo Valmarana, one of my commissioners.

I leave to Oratio Battista fabro da Pieve, and to Zuanne of Boldrini in Thiene, my relatives, hundred ducats for each of them for one time only.

I leave to Lucretia Ceratta for a single time 20 ducats and to Giacomin nephew from Pieve 30 ducats, also to him for a single time. And they should be paid with comfort once a year as it will seem to my Commissaries.

I order and I pray my Commissioners that they make me sit in my place and house of Montechio Precalzin above the chimneys of the two rooms with a beautiful and honoured manner and that my head and portrait of stucco in the room above the horto and that of the Ill. Cardinal Bembo in the room where I sleep which both are in my study and which as an invoice of the former Mr. Alessandro Vittoria my most cordial Friend deserve to be preserved and the meti in work the son of M. Francesco sculptor is in Pedemuro who I know will willingly do for my sake, however, being satisfied with his paycheck. The rest of the important things, drawings, paintings, my paintings and those of my studio are that according to the opinion of my Commissarii they are with every megior way sold and the tract invested for half for the benefit of my heredi except that anything that pleased the said my Commissarii and especially to Mr. Gio. Batt. Liviera any thing of importance and design as that which also has some taste for loveliness and my memory, as I said in this by the mouth of Mr. Francesco Ceratto all of my commissarii. And in this sale and investment be executed as best it seems to agree to the same commissars, which I want and pray are the very illustrious Count Lunardo Valmarana my loving lord, Mr. Francesco Ceratto with Mr. Gio. Baptist Liviera my dear ones and which I trust that they accept this task and that they will do with all love and charity what they consider to be just and honest.

I want my death to be followed immediately by the inventory of the commissary’s furniture of the Casa de Vicenza as well as of the villa, and I want everything to be moved by anything without their order, and in the event that the very illustrious Count Lunardo was absent at the time of my death, he is expected to come, but the whole is in the custody of the commissary’s custody, and I want Mr. C. C. C. to be inventoried, and I want Mr. C. C. C. C. to be able to make the most of his time, and I want him to be able to make the most of it. Francesco Ceratto, my very cordial friend, have him take care of and pay for the money of the scoder and pay that so the ellego he and him trust for the good love that has always passed between us and for the obligations and debt which I keep dry and of his labours and of these that I intend to be done and paid (omissis).

And because I find myself having in the villa de Montechio Precalcino a possession with beautiful good and honorable fabrications above, I run in (sic) and redote in the honorable and beautiful state that are atrocious and I desire I somamente and wanting in any way that they are well and honorably maintained and atese of all points, I have had so much also always thought to condition it so that it can and is of the infras called by me and it possession and the things and fabrications with its fornimenti that I will lasserò in that one and for those together also with two fitti… Therefore I want that they are submitted to tightest fideicommisso and I forbid at all any alienation of that manco in a minimum part etc.. So I say possession and property to the children of Mes. Zuane Ceratto my nephew, that is Iseppo, Gieronimo, and Baldissera et alli figli e descendenti maschi legitimi e naturali e di vero e legitimo matrimonio nati e procreati sustiturendoli all’altro finché che vi sarà di tale descendenza, I always mean only the male legitimi naturali e di legittimo matrimonio nati e procreati… (omissis).

I inherit universal of all my other movable property stable ramsons and attions of all kinds, I want them to be the aforementioned children of the month. Zuanne Ceratto my nephew, which is Iseppo, and Gieronimo, and Baldissera, and every one of them equal and with equal harbor and part. What I order to live from huomeni from well prohibiting them to do the game of cards and that they obey the Commissarii to which racomando and the people and the stuff that I leave them etc.. (omissis).

I Hieronimo Forni confirm all above written to be so my will and have ordered and constituted all above is written.

I Francesco Ceratto, the above mentioned prayed of Mr. Gieronimo, have written down what has been said for him above, written and relegated more than once, confirmed by his signature.

I Guanne Pallavicino q. ser. Gio. Francesco prayed by Mr. Gieronimo Forni I have signed his present will and sealed out.

Io Anzolo Roman q. D. Matio so prayed as above and sotoscribed and sealed.

I Giacomo Zancan so prayed I signed and sealed as above.

Any cookies that may not be particularly necessary for the website to function and is used specifically to collect user personal data via analytics, ads, other embedded contents are termed as non-necessary cookies. It is mandatory to procure user consent prior to running these cookies on your website.